Oh! you are here, that means I have selected a good title. Thanks for coming, cheers. Please keep reading, after 1-2 paragraphs, things will be more interesting.

Well, the current research on particle physics mostly rely on the data from particle colliders like the Large Hadron Collider (LHC), Relativistic Heavy Ion Collider (RHIC) etc. I have already written a separate blog on LHC, why we need a huge machine like it, what happens at the LHC etc. You can read my blog What Happens at the Large Hadron Collider : the Big-Bang machine? where I have mainly focused on proton-proton collisions but LHC also collides heavy ions like lead (Pb) nuclie. The motivation behind it is same as discussed in the blog, to create a system similar to system produced after ~1 microsecond of Big-Bang event to study the universe evolution as well as to study the properties of Quark-gluon plasma (QGP).

The above picture shows the diagram of heavy-ion collisions as well as time evolution of the system produced due to it. Basically, in heavy-ion collisions, two Lorentz contracted Pb nuclie approach towards each other at ultra-relativistic speed and collide. These collisions are inelastic and due to this, the kinetic energy of the nuclie transformed into thermal energy or heat. The temperature is so huge that it melts nuclie and, the quarks and gluons of nucleons (proton and neutrons) become free to move in neclear dimension. As time passes, this system or fireball expands due to its inner pressure and cools down. Particle production starts taking place as temperature of fireball goes down. In 2010, QGP was discovered at RHIC and it was found that, QGP behaves as perfect liquid and shows “phenomenon of collectivity”. In this blog, I will try to explain what is collectivity or radial flow by comparing the QGP with a peg of whiskey. 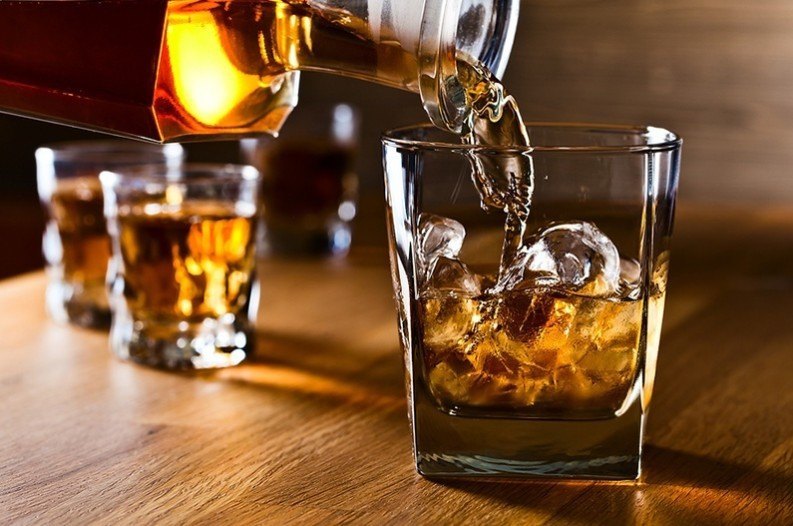 Okay! so let us start with a peg of whiskey. In a whiskey peg, there are two main components, alcohol and water (even if the peg is neat, it contains ~60% v/V water). The peg is a liquid and the molecules of the pegs are bound with each other by intra and inter Hydrogen bonds. Now let us assume a person starts drinking it. After first peg, he will feel some current like thing in his mind. After second peg, he will start discussing about his country’s problem and politics. After third peg, he will call to his ex and after not getting any response, he will realize, mother’s love is the purest form of love. After fourth peg, he will discuss about Lord Shiva and spirituality, and so on. As he drinks more, he will loose his control and his glass of whiskey will fall down. I was waiting for this event because I will not be able to explain collectivity if his glass doens’t fall. As the glass falls down, what do we see? We see the complete system i.e. alcohol plus water starts to flow as whole because alcohol and water molecules are interacting by Hydrogen bonding. We don’t see separate motion of alcohol and water molecules. The combined flow of water and alcohol molecules of whiskey peg due to Hydrogen bonding is collective flow of whiskey peg.

Connect to me on social platforms